Due to the current pandemic, our physical productions have been put on hold indefinitely. You can read below about the plays we scheduled for our 2020 season of Iowa premieres, plays that we hope to have a chance to share in the future.

And if you're looking for some exciting contemporary theatre in the meantime, check out or weekly series of free reading, "Out the Box." 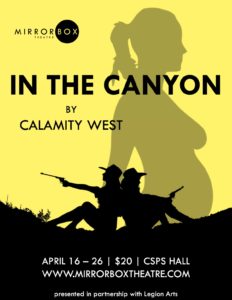 In the Canyon
by Calamity West
Directed by Cavan Hallman

In the Canyon is a new American saga by Calamity West, spanning from 2007 to 2067. In an exploration on the present attack on abortion, this Iowa premiere imagines a broken society rapidly declining into a future world set in the rocks and walls of a canyon where a story of resistance is birthed.

This production is directed by Cavan Hallman, Artistic Director for Mirrorbox, where he’s directed the Iowa premieres of Exit Strategy, Red Speedo, Luna Gale, There Is a Happiness That Morning Is, Sender, and Orange Julius.

The Iowa premiere of In the Canyon is presented in partnership with Legion Arts. 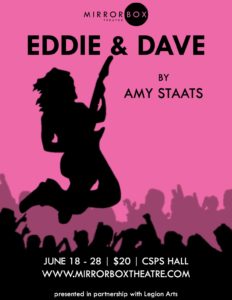 Eddie and Dave is a gender-bending new play by Amy Staats about hubris, friendship, family, fame, musical genius and what happens when the person you need is the one you find most irritating. Some plays examine the deepest questions of life. This is the play that asks: “What the !@#$ happened to Van Halen at the 1996 VMA’s?”

Amy Staats is an actor, writer and 2017-2018 Tow Playwriting Residency through the Atlantic Theater Company. Her plays include: Eddie and Dave, Hands, I Hope She’ll Be Okay, and Throws of Love.

The Iowa premiere of Eddie and Dave is presented in partnership with Legion Arts. 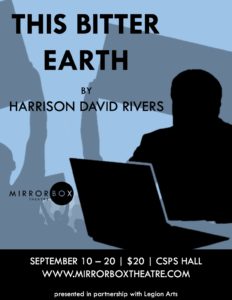 A protest brought them together. But now, as his white lover, a Black Lives Matter activist, immerses himself in the struggle, Jesse, a black man, must confront his own political apathy or risk his rights and their love. This gripping and intimate new play asks what is the real cost of standing on the sidelines?

Harrison David Rivers is the winner of the 2018 Relentless Award for his play the bandaged place. This Bitter Earth received the MN Theatre Award for Exceptional New Work, Lavender Magazine citation for Outstanding New Playwriting, and Joseph Jefferson Award nomination for Best Production. Harrison was named a Runner-up for the 2018 Artist of the Year by the Star Tribune and a 2017 Artist of the Year by City Pages.

The Iowa premiere of This Bitter Earth is presented in partnership with Legion Arts. 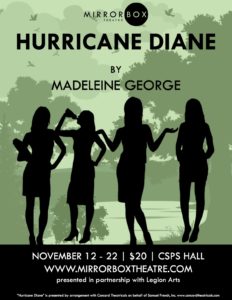 Meet Diane, a permaculture gardener dripping with butch charm. She’s got supernatural abilities owing to her true identity—the Greek god Dionysus—and she's returned to the modern world to gather mortal followers and restore the Earth to its natural state. Where better to begin than with four housewives in a suburban New Jersey cul-de-sac? In this Obie-winning comedy with a twist, Pulitzer Prize finalist Madeleine George pens a hilarious evisceration of the blind eye we all turn to climate change and the bacchanalian catharsis that awaits us, even in our own backyards.

This production is directed by Cavan Hallman, Artistic Director for Mirrorbox, where he’s directed the Iowa premieres of Exit Strategy, Red Speedo, Luna Gale, There Is a Happiness That Morning Is, Sender, and Orange Julius.

The Iowa premiere of Hurricane Diane is presented in partnership with Legion Arts.