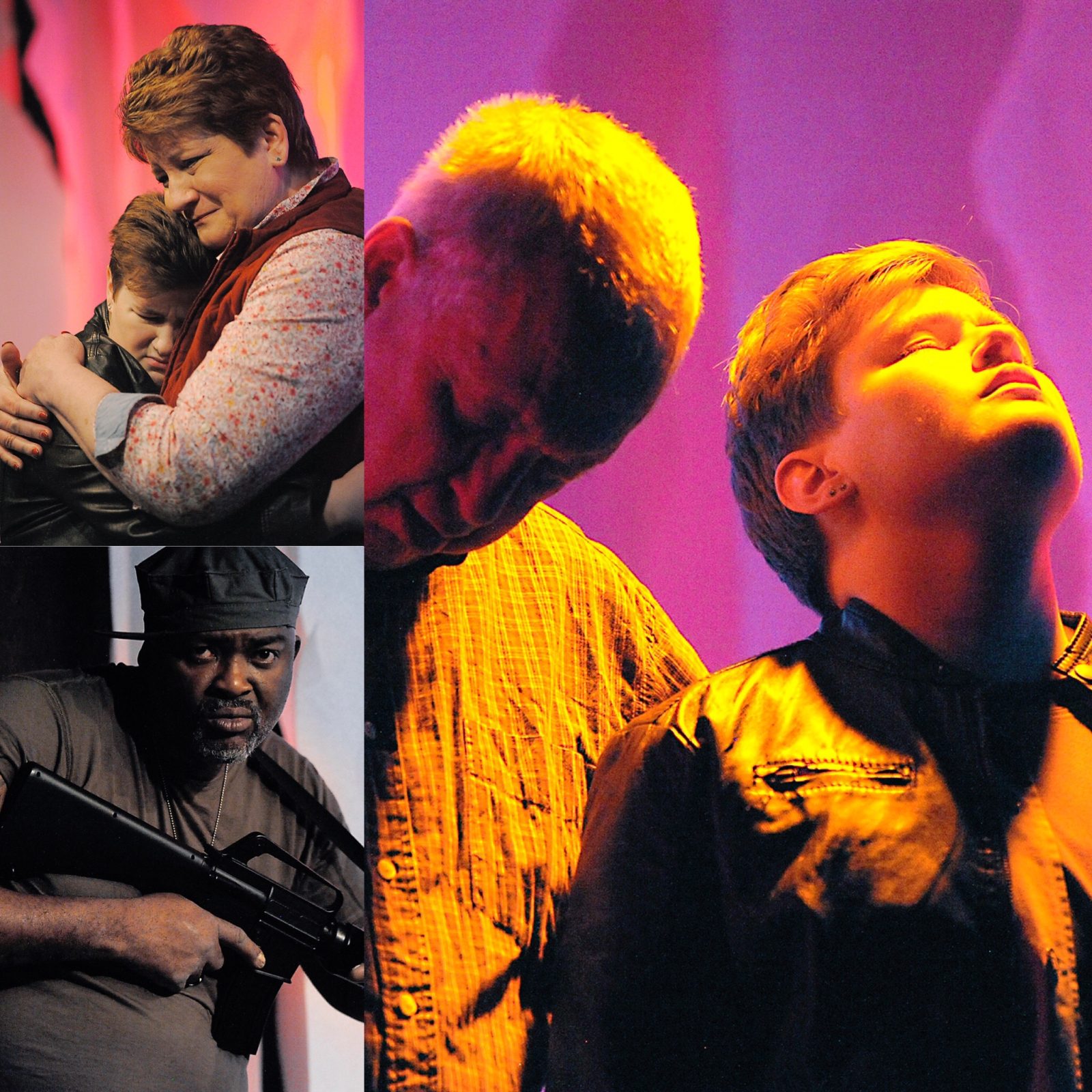 Orange Julius will be performed without an intermission

Ellie Desautels is a non-binary actor who is best known for their role as Michael Hallowell, a transgender teenage boy, in NBC’s Rise. Ellie received their Bachelor of Arts degree from Manhattanville College where they majored in Dance and Theatre with a concentration in Theatre. Theatre credits include Biff in Death of a Salesman, Bertram in All’s Well That Ends Well, and Fabian in Twelfth Night. Short film credits include Mirage and Sever.

They also wrote and performed their senior thesis performance project titled Oh, Sweet Child, which portrayed the importance of representation by bringing real trans and non-binary stories into the spotlight.

Ellie’s greatest passion aside from acting is working to improve trans and non-binary representation in film and television. They’re also a singer-songwriter.

Dennis is the William R. and Winifred Shuttleworth Endowed Chair of Theater at Coe College in Cedar Rapids, where he has directed 22 productions in the last 17 years. He has translated 8 plays from the Serbian language, all of which have been published by New Avenue Books. He has also edited two books: Theatre and Performance in Eastern Europe, published by Scarecrow Press in 2008 (co-edited with Arthur Skelton) and DAH Theatre: A Sourcebook, published by Lexington Books in 2016. Prior to entering the academic world, Dennis was an Equity actor and director in L.A. and San Francisco. In recent years, he has appeared in Detroit and Henry IV, Part One for Riverside Theatre and in Men from Tortuga for Foundry Productions.

Omarr joined the Corridor’s theatre community just one year ago. His performance include: Elf the Musical (TCR), The Full Monty (TCR), Future Thinking (Mirrorbox), Of Mice and Men (Brucemore).

Marcia is a past president of the Iowa Cultural Corridor Alliance and has served on the Iowa Volunteer Commission, as well as leadership boards of the Cedar Rapids Museum of Art, Horizons Family Service Alliance, Cedar Rapids Rotary West, Iowa Junior Miss, Playtime Poppy Children’s Theatre, Cedar Rapids Opera Theatre, Leadership for Five Seasons, Leaders in
Volunteerism, Iowa Children’s Museum, and the Cedar Rapids Convention and Visitor’s Bureau. She has worked professionally for more than 30 years in communications, volunteer management, and non-profit development.

Thank you to Cavan for his faith in her and to Ellie for so powerfully bringing this story to life.

Hannah Spina is thrilled to be making her debut with Mirrorbox Theatre! She is a Cedar Rapids native who has performed with Theatre Cedar Rapids, Classics at Brucemore, Old Creamery Theatre, Working Group, Giving Tree Theater, Riverside, and Revival Theatre Company. Favorite roles include Laura in The Glass Menagerie, Molly in Peter and the Starcatcher, Hermia in A Midsummer Night’s Dream, and Junie B. in both Junie B. Jones: Jingle Bells Batman Smells and Junie B. Jones is Not a Crook. By day, Hannah is the Development Director at Theatre Cedar Rapids and the proud dog mom of tiny pups, Bogie and Billie. She would like to thank her friends, family, and fiance, Aaron, for always loving and supporting her. <3

Basil Kreimendahl is a resident playwright at New Dramatists. His plays have won several awards, including the Rella Lossy Playwright Award and a National Science Award at the Kennedy Center American College Theater Festival. Kreimendahl has been commissioned by Oregon Shakespeare Festival’s American Revolutions Program, and by Actors Theatre of Louisville. We’re Gonna Be Okay had its world premiere at the 2017 Humana Festival. Kreimendahl’s play Orange Julius was developed at the O’Neill National Playwrights Conference and had its New York premiere at Rattlestick Playwrights Theater, in a co-production with P73. Sidewinders had it’s world premier at Cutting Ball Theater in San Francisco. Kreimendahl’s plays have also been produced or developed by New York Theatre Workshop, American Theater Company, Victory Gardens Theater, Ryder Farm, The Lark, La Jolla Playhouse, and Labyrinth Theater Company amongst others around the country. They have been a Playwrights’ Center Jerome Fellow and a McKnight Fellow and received an Art Meets Activism Grant for work with the trans community in Kentucky. Kreimendahl’s work has been published by Dramatists Play Service, Dramatic Publishing, TCG and HowlRound. They received their M.F.A. from the University of Iowa in 2013.

Cavan Hallman’s writing has been performed in NYC, New Orleans, Chicago, Ireland, on screen, and on tour. His touring educational plays, which he also directed, have been performed over 20,000 times for nearly 5 million students across the United States. Cavan directed the world premiere of the musical Pictures of Marilyn at the National WWII Museum, named one of the ten best musicals of 2016 by The New Orleans Times-Picayune.

He is the Founding Artistic Director of Mirrorbox Theatre, based in Cedar Rapids, where he has directed six Iowa premieres since 2018. Elsewhere in the Corridor, he has directed The Full Monty, The Girl Wonder (Underground), taught Scriptwriting, and served as a New Work Development Consultant at TCR; written and directed for Playtime Poppy’s Summer Theatre Adventure; performed his solo show at RAYGUN, and worked as a writer and performer for SPT’s Tales From the Writer’s Room.

In the summer of 2020, The Suffragist, his musical collaboration with Nancy Hill Cobb, will premiere at the Gallagher Bluedorn Performing Arts Center.

Cavan is a Resident Artist with The CRY HAVOC Company in New York City. He has an MFA in Playwriting from the University of New Orleans, for whom he has also taught writing and acting, both on campus and for their study abroad program in Ireland. Cavan is a proud husband and father.

Jaime Hein is thrilled for the chance to work on this great show with this talented group of people. She has many credits on and off stage, including SM for the last two New Play Festivals, AD/SM for Dead Man’s Cell Phone & The Bully Plays at TCR and ASM for Apples in Winter at Riverside Theatre. When not hanging around the theatre scene Jaime is working full time at ESP International and taking care of her favorite dog, Dudley. Jaime also serves as the Company Manager for Mirrorbox Theatre.

Jim Vogt (Marietta College 2012) is a lighting designer, actor, singer, and theatrical technician in the Corridor area. He is excited to work on his eighth show here with Mirrorbox Theatre. Some favorite past productions include Vanya and Sonia and Masha and Spike (Spike), Footloose (Chuck/Lights), and Billy Bishop Goes to War (Lights). A big thanks to Mirrorbox Theatre for this opportunity, and lastly, thank you CL.

Ray Vanek’s first production with Mirrorbox Theatre has been a delight. He has previously Assistant Directed TCR’s Bent  and Stage Managed for Riverside Theatre on The Cake, The Gospel According to…, and Uncle Vanya. You also might have seen him hamming it up in TCR’s Shakespeare In Love — his first time on stage in years. His Chicago theatre work includes Production Stage Managing for Echo Theatre Collective and Assistant Production Managing the 2017 season of Theater on the Lake. Many thanks to Cavan for bringing him on board this beautiful show. It’s been an honor. As always, thanks to SMP and SAB for all the things.

Thank You to Our Generous Donors

You make it possible for us to bring the best new plays to Cedar Rapids.