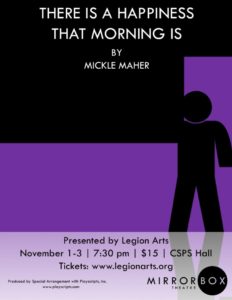 There Is A Happiness
That Morning Is

Produced by Special Arrangement
with Hope and Nonthings Publishing

Matthew James could quite possibly be:

He’s acted “here”, and performed “there”;

For all those lives he has great care.

To Jaime, Jason, Angie, and Cavan:

Thanks for creating a theatrical haven

of Joy,  and Truth; for much love of the Craft.

“To you, our class, and this might sound daft,

Thanks for coming to see our show:

Means more to me than you’ll possibly know.”

Angie Toomsen is thrilled to be working on such a complex and glorious text with four of her favorite area theatrical collaborators. Typically found in the director’s seat, she thanks Cavan and Mirrorbox Theatre for rekindling her passion and appreciation for acting. Angie has directed at theaters all over the corridor, most frequently at Theatre Cedar Rapids and Riverside Theatre. She is proud to be TCR’s artistic director and is a founding member of Iowa City’s Fourth Room Theatre.

Jason Alberty is a local not-for-profit raconteur and theatrical ne’r-do-well who is excited for this opportunity to work with Mirrorbox Theatre. The idea of working with Cavan was tasty enough, but when doused with the salt of Angie Toomson and the peppa of Matthew James, his pudding was totally in the pan. Jason and his incredible wife Julie own the Shores Event Center and the fledgling, soon to be non-profit, Foundry Performance Laboratory.

Mickle Maher is a cofounder of Theater Oobleck and the author of numerous plays, including There is a Happiness That Morning Is; An Apology for the Course and Outcome of Certain Events Delivered by Doctor John Faustus on This His Final Evening; The Hunchback Variations; The Strangerer; Spirits to Enforce; The Cabinet; Lady Madeline; and An Actor Prepares (an adaptation of Stanislavsky’s seminal book). His plays have appeared off-Broadway and in theaters around the world, and have been supported by grants from the National Endowment for the Arts, the Rockefeller Foundation Multi-Arts Production Fund and Creative Capital. He currently teaches play writing and related subjects at the University of Chicago and Columbia College.

Jaime Hein (Stage Manager) is very excited for the chance to work on this incredible show with this amazing group of people. She has many credits on and off stage, including SM for the last two New Play Festivals, AD/SM for Dead Man’s Cell Phone & The Bully Plays at TCR and ASM for Apples in Winter at Riverside Theatre. When not hanging around the theatre scene Jaime is working full time at ESP International and taking care of her favorite dog, Dudley. Many thanks go out to Cavan and the entire cast of Happiness... Also, thanks to Anna for helping out with Dudley and Dudley for letting mom be gone nights.

Jim Vogt (Marietta College 2012) is a Lighting designer, actor, singer, and theatrical technician in the corridor area. He feels privileged to have designed lights for every Mirrorbox show in this inaugural season. Jim currently serves as an Artistic Associate with the Old Creamery Theatre in Amana where he is currently in The Addams Family (Lurch/Lighting design). Some favorite past productions include Vanya and Sonia and Masha and Spike (Spike), Footloose (Chuck/Lighting design), and Billy Bishop Goes to War (Lights). A big thanks to Mirrorbox Theatre for this opportunity, and lastly, thank you CL.

K Michael Moore is an actor, director, writer, and stage violence choreographer in the Corridor. Favorite projects include Ed in The Curious Incident of the Dog in the Nighttime, Dan in Next to Normal, Willoughby in Sense and Sensibility, and working the fights for She Kills Monsters. The scars on his hands are not from choreography gone wrong, but rather vicious and deadly kitten attacks. Many thanks and hugs to Christmas for being the air and water.

Cavan Hallman’s writing has been performed in NYC, New Orleans, Chicago, Ireland, on screen, and on educational tours. Heartland Plays recently published his adaptation of …Sleeping Beauty. He directed the world premiere of the musical Pictures of Marilyn at the National WWII Museum, named one of the ten best musicals of 2016 by The New Orleans Times-Picayune.

In Eastern Iowa he has worked with Theatre Cedar Rapids as a performer, director, and teacher; directed for Playtime Poppy’s Summer Theatre Adventure; performed his solo show at RAYGUN, and worked as a writer and performer for SPT’s Tales From the Writer’s Room. He is currently collaborating on a new musical with Nancy Hill Cobb. His next directing project will be The Full Monty at Theatre Cedar Rapids.

Cavan is a Resident Artist with The CRY HAVOC Company, and the Artistic Director for Mirrorbox Theatre, where he has directed Exit Strategy, Red Speedo, and Luna Gale. Love and thanks to Katie for all of your support.